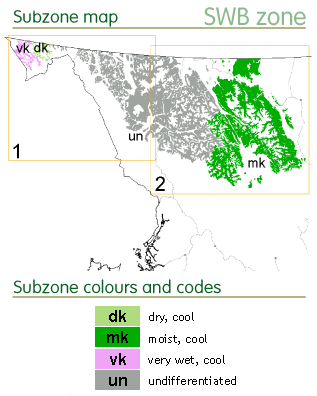 The SWB occurs at high elevations in northern BC, covering 7.7 % the province. It occupies much of the Yukon, Laird and Stikine plateau and the upper slopes of the northern Rocky Mountains, the Cassiar, northern Omineca and Skeena Mountains, and some of the St. Elias Mountains.

The continental to hypercontinental SWB zone has the coldest climate of the three subalpine boreal zones in BC (eg. the pacific subalpine boreal MH zone and sub-continental to continental ESSF zone). With a mean annual temperature of only -1.0 °C it is the coldest forested zone in BC. The winters are long and cold and summers extremely short and cool. In most parts of the zone average monthly temperatures are above 10°C for only one month of the year. The lower elevation limit ranges from 800- 900m over most of the zone, however in the northwestern corner of BC, the SWB zone occurs at elevations as low 300m in SWBvk and 600m in the SWBdk. Precipitation can be up to 4 times higher in the northwestern portion of zone. 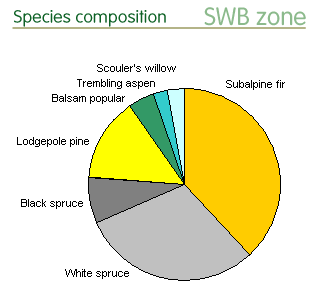 White spruce and subalpine fir are the most common species in the zone. Forests on lower slopes and valley bottoms are dominated by white spruce with mixtures of lodgepole pine, black spruce, and trembling aspen. On upper slopes and base rich soils, forests of subalpine fir are common. Open forests and woodlands are found on steep, moist, cold slopes whereas grasslands are found on steep warm-aspects slopes. Balsam popular together with apsen can form the timberline. Alders, scrub birch, and arctic and subalpine willows associate with open canopy stands and form dense thickets in areas with cold-air ponding and in upper elevation scrub/parkland ecosystems.

To see how species composition in the SWB zone varies with climate, view species by subzone pie charts.

The SWB has relatively few protected areas (< 40) but a very high percentage (80%) of protected areas greater than 250 ha.  On average 20% of the land base is protected. The least protected unit at 15% coverage has a higher protection level than the provincial average, and in the northwest, the Tatshenshini–Alsek provides almost complete (92%) protection for the SWB vk/dk unit.

All species in the SWB zone have high calculated protection levels, i.e. they are expected to occur in more than 3 protected areas at threshold values.