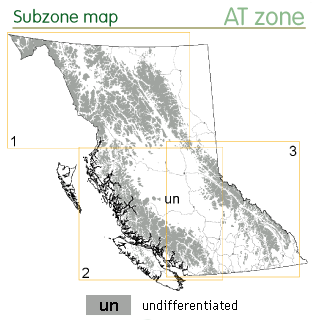 The AT zone occurs at higher elevations in mountainous areas throughout BC. It is the largest zone in BC, covering 17.5 million ha or 18.4% of the province. The AT zone occurs above the MH zone in coastal BC, the ESSF zone in eastern BC and the SWB zone in northern BC. 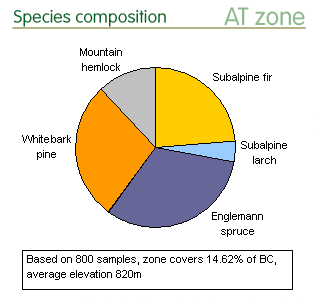 While the zone is considered non-forested, trees in stunted or krummholz form do occur at lower elevations on sites with shallow or early melting snow. Mountain hemlock, subalpine fir, white bark pine, subalpine larch and Englemann spruce are the major timber line species; yellow-cedar and white spruce are less common. These tree species are found on 9.9% of the land in the AT zone. Alpine vegetation (cushion or trailing shrubs, herbs, bryophytes, and lichens), which is scarce and generally patchy, occurs at mid to lower elevations on only 2.1% of the land. The remaining land (87.7%) lacks vegetation and is covered by rock, snow and ice.

The tree species are expected to be well protected at threshold values throughout the three regions of the AT zone.

No genetic resource conservation concerns were identified for the tree species in the AT zone.

The general ecology information presented here has been summarized from the BC MOF brochure and the BC MOF publication Meidinger, D. and J. Pojar. 1991. Ecosystems of British Columbia. BC Ministry of Forests, Victoria, BC. 330pp.