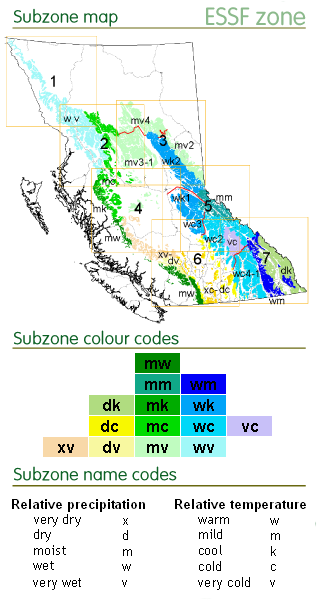 The ESSF is the third largest zone in BC, covering 14.5 ha or 15.3% of the province. It has a subalpine boreal climate and occurs at high elevations on all the major mountains surrounding the interior plateau: the Selkirk, Purcell, Columbia and Rocky Mountains, and the Skeena, Babine and Omineca ranges. In western BC, on the Cascades and Coast Mountains, the ESSF merges with the MH zone – the coastal subalpine boreal equivalent. In the north, the ESSF grades into the SWB zone – the most continental of three subalpine boreal zones. With increasing elevation on the higher mountains, the ESSF forests grade into parkland ecosystems and the AT zone. Depending on the region, the ESSF can be found above the MS, SBS, ICH and BWBS zones.

The winters are long and cold and the summers cool and short (temperatures are above 10°C for only 0 – 2 months of the year). Precipitation and the amount of snowfall varies greatly across the zone. Snowpack can range from 1- >3m and can be long lasting in some areas. Mean annual precipitation in the forested subzones is highest (1500 to 1600mm) in the wetter subcontinental (ESSFmk, mw) areas on the leeside side of the Coast Mtns and in the high snow fall areas of the Columbia and Rocky Mtns; precipitation is lowest (600-850mm) in areas near the Chilcotin (ESSF xv), south central BC (ESSF xc, dc) and in some northern interior areas (ESSSFmv1, mv4). The elevational limits also vary greatly by subzone. The ESSF zone can occur as low as 500-900m in the northwestern subzones (ESSF wv, mc, mk,) and not begin until 1300- 1400m in certain southern subzones (ESSF xc, wc, dc, dk, wm). 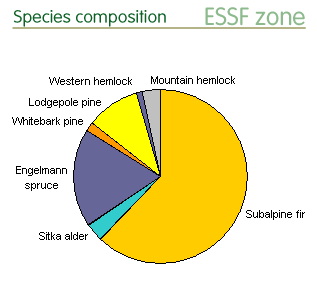 Lodgepole pine is common minor species in most subzones. It is abundant in seral stands following wildfire and is also found on drier sites. Western hemlock occurs at lower elevations in a few warm to mild subzones. Douglas-fir and western redcedar are other minor associated species which occur at lower elevations in selected subzones only. Mountain hemlock is found at higher elevations in sub-continental subzones and areas with high snow fall. Other minor high elevation species include limber pine and alpine larch.

To see how species composition in the ESSF zone varies with climate, view species by subzone pie charts.

All species characteristic of the ESSF are adequately protected and have more than 15% of their provincial cumulative cover range protected.  The minor or rare species in the zone with low protection levels include ponderosa pine, hazelnut, and Rocky Mountain juniper, pussy willow, water birch, yellow-cedar and limber pine.

Ponderosa pine, hazelnut, and Rocky Mountain juniper occur infrequently at lower elevations in the southern ESSF. They are not considered high priority species in terms of genetic conservation as there are several large multi-zone (spanning the ESSF, MS, IDF, or ICH zones) protected areas in the west, east and central interior which may provide protection should their presence increase with climate warming. Yellow-cedar, which has an isolated rare presence in the Valhalla Range of the Selkirk Mountains (some of which is protected) and infrequent occurrences in transitional subzones bordering the CWH and MH zones, is not considered a high priority species.

Pussy willow and water birch are wide-ranging species that have only a minor portion of their ranges (4–5% cumulative cover) in the ESSF.  Water birch is not considered a species of top concern because it may be present in several protected areas at mid to high elevations in eastern BC and in the southern interior. Also, conservation efforts for water birch may be more effective in the IDFxh2 and dm2 where it is 10 times more frequent, or in the northern part of its range in the BWBS zone.  Pussy willow has low protection in the ESSF and in the adjoining MS zone. It is considered a species of concern as it is predicted to occur at threshold values in only one protected area (Cariboo) in the entire the southeastern part of the ESSF and in the MSdk, IDFdm2, and eastern ICH subzones.

In BC, limber pine is mainly found in the southern Rocky Mountain Trench (IDFdk5, MSdk, and ESSFdk). Protection levels are unknown for limber pine in the adjoining MS zone and are estimated to be low in the ESSFdk. It is considered a species of concern in the ESSF in terms of genetic conservation.

In addition to the field verification of limber pine’s in situ conservation status, it is suggested that increased efforts be directed toward ex situ (seed collection and storage) conservation and active management (such as selecting and deploying disease-resistant individuals), which may provide greater long-term benefits for this pest and pathogen affected species.  Field verification for pussy willow is first recommended in the large multi-zone protected areas in the southeastern ESSF zone.