About BEC and BGC units

A Brief History
The BEC classification system was developed by V.J. Krajina and his students in the 1960’s and the 1970’s. It was adopted by the BC Ministry of Forests in 1976 and is widely used today for forest, range and wildlife management. Refinement and expansion of the classification system is ongoing and has been extended to seral ecosystems and non-forested ecosystems such as wetlands and riparian areas, grasslands, alpine tundra and parkland. Here we briefly describe some of the components as they relate to this project. For more detailed information on the BEC system see the BC Ministry of Forest BEC webpage or Meidinger, D. and J. Pojar. 1991. Ecosystems of British Columbia. BC Ministry of Forests, Victoria, BC. 330pp.

BGC Zones
BEC is a hierarchal classification system that uses climax vegetation communities to infer the combined ecological effects of climate and soil. At the highest level, the regional level, the province is divided into 14 biogeoclimatic zones. These zones are large geographic areas with relatively uniform climate, i.e. similar regional or macroclimate. Zones are usually named after one, two or three of the dominant climax species. The names can also include another general distinguishing feature of the area such as geographic location (interior, coastal,) or climate (subboreal, boreal, montane). The names can be written in full or abbreviated: Coastal Western Hemlock Zone or CWH zone. 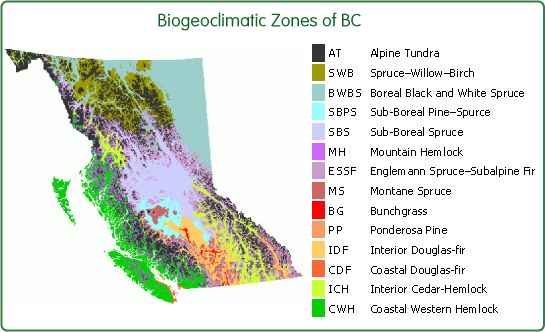 Subzones and variants
Zones are further divided into climatically distinct subzones. Subzones are named first with a descriptor of relative precipitation (moisture) and then either relative temperature or continentality. For example, subzones in the CWH zone range from very dry maritime (CWHxm) to very wet hypermaritime (CWHvh). Subzones that have considerable variation in climate are further divided into variants. Variants are areas which are slightly drier, wetter, snowier, warmer, or colder than typical but with a vegetation community that is not different enough to be considered unique or distinct subzones. Numbers are used to identify variants, e.g. CWHvh1 or CWHvh2.

The climate class modifiers applied when naming subzones are relative. In most cases they are inferred from the vegetation communities and not derived from actual weather station data. With the availability of new climate data in GIS format covering the entire province (elevation adjusted PRISM data) we have further quantified the climatic differences between subzones/variants.

The variety of growing sites that occur in each subzone or variant are described using site classification. Site classification describes the pattern of ecosystems across the landscape as it relates to specific site conditions (soil moisture and nutrients). For the purpose of cataloguing in-situ conservation of genetic resources of forest trees we perform most of the analysis at the zone or subzone/variant level and do not use finer levels of classification. Generally, species only show broad patterns of adaptation to macro-climatic conditions (zone level of the BEC system). However, if a tree species exhibits a disjunct distribution or other spatial patterns restricting geneflow, genetic differentiation may be observed at the subzone/variant level.

Subzone/variant groups
In some cases we use a simplified BEC system as a framework, where some small variants and subzones are grouped if they are geographically adjacent, similar in species composition, and similar in climatic conditions. Major genetic differentiation within these combined landscape units would not be expected for any tree species. This simplified system is used when evaluating (1) the protection status of tree species, (2) land use patterns, (3) potential impact of climate change, and (4) policy recommendations for landscape units. Subzones and variants were not combined when calculating species composition statistics.