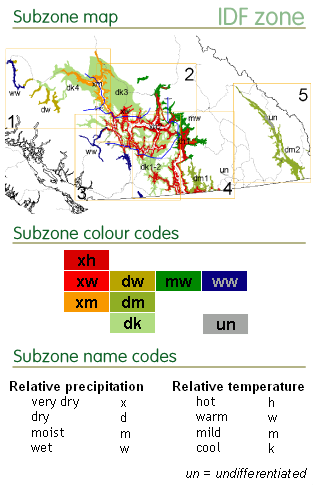 The IDF zone occurs in southern BC, covering 5.5% of the province. It is located at mid-low elevations in the southern Rocky Mountain Trench to the east, on the southern portion of interior plateau in central BC and up the lower leeward slopes of the Coast Mountains in the west. The lower elevation limit can be as low as 130 m in the western portion of the range and high as 900m in the northern areas. The upper elevation limit ranges from 1200 to 1600m.

In the north the IDF adjoins the colder SPS and SBPS zones. To east in the central interior or to the north in the Rocky Mountain Trench it adjoins the wetter ICH zone. At higher elevations it grades into the MS zone, or the CWH zone in the coast-interior transition area to the west. In the deeper valleys it the central interior it generally occurs above the drier and warmer PP zone but along the Fraser and Chilcotin Rivers where the PP zone is absent it grades straight into BG zone.

The IDF is one of the three zones in BC with a cool temperate climate. Unlike the ICH zone, the IDF and PP zones are considered summer-dry. Being in the rain shadow of the Coast, Cascade and Columbia Mountains, growing season soil water deficits are common. The IDF is located at higher elevations than the PP zone and is cooler with less moisture stress. The growing season is warm, dry and relatively long (3-5months) with night-time frost occurrences and the winters are cool with little snow.

The IDF is divided into 7 subzones which vary in temperature and precipitation. In the driest subzone (IDFxw) found near Clinton and Cache Creek and in a portion of the Fraser Valley to the west of Cache Creek, the mean annual and summer precipitation is 340 and 170mm. At higher elevations on the interior plateau mean annual precipitation ranges from 380 to 600 (IDFdk). In the Rocky Mountain Trench (IDFdm) it ranges from 480-500mm. The wetter subzones are located in interior wet-belt transition areas (IDFmw – higher amounts of summer precipitation) and in the coast-interior transition areas (IDFww – higher amounts of winter precipitation). The warmest temperatures occur in the Rocky Mountain Trench and at lower elevation in the interior region. It is generally coolest in the winter in higher elevation subzones and coolest in the summer along the coast-interior transition. 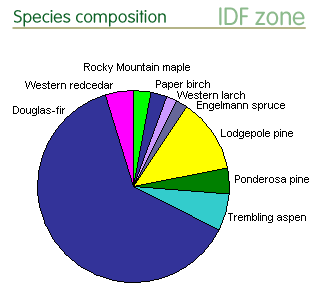 Douglas-fir is by far the most common species in the zone. The historically frequent forest fires (ground fires) favoured the larger individuals with thick bark and consequently mature, open canopied and uneven-aged stands of Douglas-fir stands are very common. A history of crown fires is indicated by mixed stands of Douglas-fir, lodgepole pine, and ponderosa pine. Lodepole pine is a widespread seral species at higher elevations. Ponderosa pine occurs on dry sites (warm slopes) in the wetter subzones but is most common in the hotter and drier lower elevation subzones in the interior. On the driest sites it will persist as the climax species.

In the warmest and driest areas, a combination of fire, topography and soil conditions promote extensive glasslands where ponderosa pine can occur in open, park-like stands. Non-forested wetlands and scrubby marshes with willows and alders are common. Alkaline salt meadows are also found in this zone.

To see how species composition in the IDF zone varies with climate, view species by subzone pie charts.

The IDF zone has more than 160 protected areas but only 5% of the land is protected.  Protected area coverage ranges from very high in the wettest subzone/variant at the coast–interior transition (IDFww/dw: 37%) to very low in the geographically isolated cool temperate and semi-arid ecosystems in the Rocky Mountain Trench (IDFdm2:1%).  Coverage is also very low in the north-central portion of the IDF (IDFdk3 and dk4: < 2%) and in the adjoining portions of the SBS (dw, mk, xc, dc) and nearby portions of the ICH (dk/mk3).

Most common species in IDF have a low proportion of their species ranges protected.  Of the 37 species, 22 have adequate protection in the zone as a whole, but only western larch, ponderosa pine, trembling aspen, lodgepole pine and Douglas fir are expected to occur in the Rocky Mountain Trench (IDFdm2) at threshold values.  Hawthorn, pin cherry, choke cherry, hazelnut, mountain hemlock and white spruce are not expected to occur in the IDFdm2 or in the bordering multi-zone protected areas (MS portion of Kootenay National Park or in the PPdh2 in Wasa Lake).  The populations of these locally under protected species may be genetically important and are recommended for genecological testing.  Hawthorn is potentially under-protected in most zones and is recommended for verification throughout the IDF zone where it is most abundant (78% of its provincial cumulative cover range occurs in the IDF).

Of the 15 species with low protected area representation in the IDF, limber pine, bitter cherry, pussy willow and shinning willow are identified as species of concern.  The remaining species are mostly considered transitional, atypical or too rare.

Amabalis fir, red alder, Pacific dogwood, bigleaf maple and vine maple mostly occur in cool mesothermal or subalpine boreal climates of the coastal CDF, CWH, and/or MH subzones where they are generally expected to be well protected.  In the IDF, they are found at the coast–interior transition.  Protected area coverage in this area is already high (>30% of the land area) should the potential for range expansion into the IDF exist.

Cascara, Pacific yew, and grand fir occur in coastal mesothermal and interior cool temperate climates.  They have disjunct distributions across the southern portion of BC and are considered transitional species in the IDF.  Their populations in the IDF ww/dw, where protected area coverage is > 30%, could be important if protection levels in the nearby CWH subzone were found to be low.

Whitebark pine is characteristic of colder, high-elevation climates and its rare and sporadic occurrence in the IDF is not of primary concern in terms of conservation genetics.Subalpine fir is also characteristic of snowier and colder climates and is very well protected in other zones.  Western white pine has most of its range located in the CWH, ESSF, ICH, and MH zones where it is well protected.  It occurs in a variety of subzones in the IDF but attains its highest frequency in the already well-protected IDF ww/dw. For species greater long-term benefit may be derived from increased ex situ protection and continued active management efforts.

Limber pine is a very narrowly distributed species in BC. It occurs with very low frequency in the southern Rocky Mountain Trench. Since its calculated protection is also low the ESSF zone, it is rated as a high priority species in the IDF zone.   Bitter cherry is protected in the CWH and potentially protected at lower threshold values in the ICH.  In the IDF it expected to occur in only one protected area and is recommended for field verification. Pussy willow is potentially under-protected in a number of zones. In the IDF (containing 25% of its range), pussy willow is expected to occur in only one protected area at the lowest threshold values. Pussy willow and shinning willow are considered species of concern in the IDF.

An increase in protected areas is recommended for the IDFdk3/dk4 or xm/xw, where pussy willow and hawthorn frequently occur. This could also benefit choke cherry and pin cherry, which have low calculated protection levels in the IDFdk3/dk4 and in the adjoining SBS, SBPS, and ICH subzones.  It is expected that the conservation status of a number of species would improve with the addition of a new large, multi-zone (PPdh2, IDFdm2, ICHmk,mw, and southern MSdk) protected area in the Rocky Mountain Trench.