The SBS zone is the third largest forested zone in BC and occupies 10.9% of the province. It is mostly found on the rolling landscape in the central interior portion of BC.

The zone covers a wide latitudinal and longitudinal range and has many bordering zones. It borders the colder BWBS in the north and east; the wetter and milder CWH to the west; the slightly cooler and drier SBPS in the southwest; the drier and warmer IDF to the southeast; and the ICH in wetter areas to the north and east. It is a montane zone mostly occurring between 600 and 1300m. In mountainous areas the zone grades into the supalpine ESSF zone.

The diversity of bordering zones is mirrored in the high number of subzones and their climatic variation. Across the zone temperatures range from 12.2°C in southeast (SBSmc3, near the colder SBPS zone) to 16.1° in the southern central portion (SBSmh, near the warmer ICH and IDF zones). Mean annual precipitation nearly doubles from 500mm on low lying areas of interior plateau to 950mm on the mountainous terrain in the central western portion of the zone (SBSvk).

Overall, the climate in the zone is mild continental and less extreme than in the adjoining BWBS zone to the north. The SBS is slightly warmer in winter, cooler in summer, has a slightly longer growing season (2-5 months), and is slightly wetter. 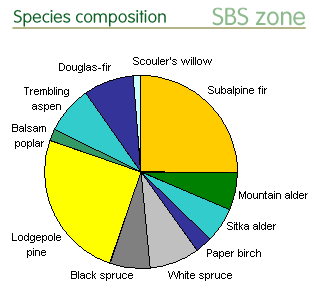 Most of the zone is covered with upland coniferous forests. Hybrid white spruce and subalpine fir are the major species in old-growth stands. Younger forests are dominated by lodgepole pine, trembling aspen and paper birch. Black spruce and balsam popular are restricted to wetter and alluvial sites, respectively. Douglas-fir is abundant on warm, dry and rich sites in the southern central subzones. Sitka alder grows under spruce-fir forests and mountain alder along stream sides and in bogs. Wetlands, dominated by communities of scrub (willows and scrub birch), sedges and Sphagnum moss, occur on flats and water-receiving sites.

To see how species composition in the SBS zone varies with climate, view species by subzone pie charts.

The SBS zone has more than 130 protected areas (45% are larger than 250ha) but only 6% of the total land area is protected, making it the fourth least protected zone in BC ( after the IDF, PP, and CDF zones). Coverage is skewed, ranging from 14% in the SBSmc2 to < 1% in the SBSmw. The high coverage in the mc2 and mc3 is mainly in the two large protected areas: Tweedsmuir and Entiako.   Most of the subzone units have less than 5% coverage and a substantial portion of forests younger than 120 years. The SBSdw, mw, and mh have few large protected areas and are the least protected units with < 2% of the land protected; coverage is also low in the adjacent IDFdk3, dk4, and ICHmk3 subzones.

There are seven minor species in the SBS with low calculated levels of protection (whitebark pine, western redcedar, water birch, hazelnut, bitter cherry, pin cherry and pussy willow). Only pussy willow and pin cherry populations are considered of primary importance in terms of genetic conservation.  These two species have low, province-wide protection in six (BG, ESSF, ICH, IDF, MS, SBPS) and five (BWBS, ICH, IDF, PP, SBPS) other zones, respectively.  The other under protected species’ are considered either infrequent or atypical of the zone, or are potentially protected at lower threshold values without the same, range-wide conservation concerns.  Whitebark pine is atypical in SBS zone and unlikely to persist with climate warming.  Western redcedar is presently uncommon in the SBS zone, but it is noted that few large protected areas occur in the areas bordering the ICH zone should this species increase with climate warming.  Water birch occurs very infrequently in the SBS zone mainly in the northern SBSmk2. Local population near Williston Lake or elsewhere in the Peace River watershed could be of importance if field verification in the BWBS zone reveals low protection levels for this species.

Additional protected area coverage in the SBSmh, dw2/1, and mw would increase the low coverage levels that exist on parts of the Interior Plateau and could potentially improve the protection status of pussy willow, pin cherry, and hazelnut, and other infrequently occurring species (eg. western redcedar, water birch and bitter cherry).