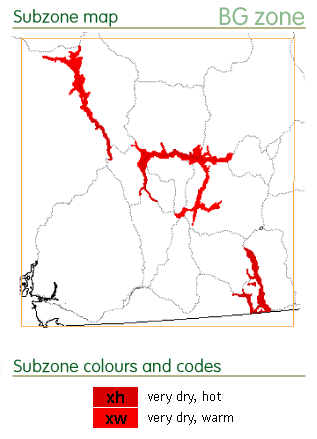 The BG zone occurs at low elevations in the very dry valley bottoms in the southern interior (Chilcotin, Fraser, lower Thompson, Nicola, Similkameen, lower Kettle, Okanagan Lake). It occurs below the PP zone or in some areas below the IDF zone. It is one of the smallest zones in BC covering only 0.3% of the province.

The zone has a semi-arid climate with evaporation rates in excess of precipitation. The summers are long, warm to hot, and very dry. Winters are cold with very little to no snowpack. Summer precipitation, which often falls in high intensity storms, evaporates too quicky to replenish soil water stores. Where summer drought is exacerbated by high evaporation grassland and shrub-steppe vegetation develops and dominates the landscape.

The zone is divided into two subzones which occupy different topographic positions (elevations). The lower BGxh subzone is warmer and generally drier than the BGxw. The subzones are divided into variants based on differences in temperature and precipitation; the northern variants are cooler and wetter than southern ones. The mean annual temperature, annual precipitation and summer precipitation for the BG zone is 5.9°C, 337mm, and 163mm respectively. 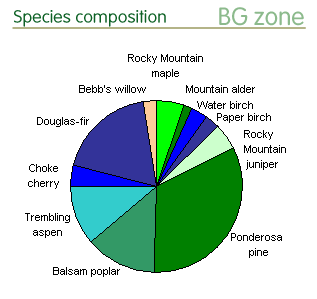 Forested ecosystems are uncommon and occur only on steep slopes, coarse textured soils or on moist draws. Rainwater that falls on fine texture soils will pool at the soil surface where it will either evaporate or be taken up by more the shallow-rooted drought tolerant shrubs and grasses.

Ponderosa pine and Douglas-fir are the most common species in the scattered open-canopied unproductive forests. The other tree species are mainly associated with wetter sites, flood plains or wetlands (shallow marshes and riparian areas).

To see how species composition in the BG zone varies with climate, view species by subzone pie charts.

The very high levels of development, agriculture, grazing, invasive species, and fire suppression have affected the natural ecosystems in the BG zone. Most of the natural forested and grassland ecosystems in the BG zone are considered to be at risk and contain many threatened or endangered plant and animal species.  The zones minor tree species are generally restricted to small, wetter areas such as wetlands, riparian areas, or sites with very coarse soils, cool aspects, or seepage – all areas where private land ownership and land use is extensive.  The encouragement of good stewardship practices on private lands and the creation of corridors along the waterways would benefit protected area connectivity. In highly fragmented and disturbed landscapes, species populations on protected private land may be important for conservation.

With the low percent cover frequencies for species in the BG zone, only the largest protected areas are expected to contain sufficient population sizes for conservation.  For this reason, the redundancy in protection (i.e., number of protected areas which qualify as genetic reserves) is much lower than in other zones. Considering the site requirements of the tree species (restricted to wetter sites), the protected area population size predictions may be unreliable.  In this zone, estimates of population sizes based on the availability of suitable habitat from recent mapping inventories should be investigated.

Paper birch, bitter cherry, hawthorn, Scouler’s willow, shinning willow and pussy willow all have low calculated levels of protection.  These species generally have a small portion of their range in the BG zone and contribute little toward total tree cover.  Paper birch, Scouler’s willow, and bitter cherry are not considered species of top concern as they are expected to occur with higher frequency in the adjoining PP and IDF zone portions of several large, widely distributed, multi-zone protected areas.  The local populations of pussy willow, which are most frequent in the Fraser River basin (BGxh3, xw2), could be important if the species is found to be unprotected in the IDF portion of Churn Creek (IDFdk4, xm).  The BG zone may offer the best protection opportunities for shinning willow in the semi-arid or drier, cool temperate portions (PP and IDF zones) of south central British Columbia.  Hawthorn has a higher portion (8%) of its range in the BG zone compared to the others. It appears to be under protected in the BG and in many other zones throughout BC.