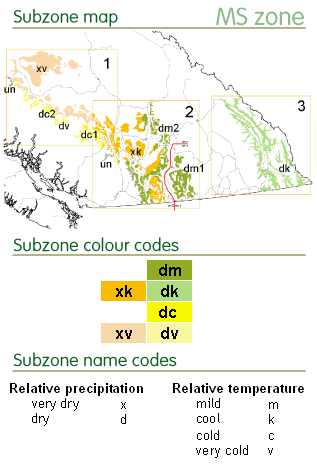 The MS is a small montane zone that covers only 2.9% of the province. It occurs on the high plateaus in central and southern interior BC, on the leeside of the Coast and Cascade Mountains, on the southern Rocky Mountains, and in the Rocky Mountain trench.

The MS zone occupies a narrow elevational band situated below the subalpine ESSF and above the IDF and SBPS zones. It has a continental climate with cold winters and short (2-4 month), dry, and warm summers. It was originally treated as the drier and warmer, low-elevation portion of the ESSF zone but today is considered a separate zone, transitional between the ESSF and the IDF zones. 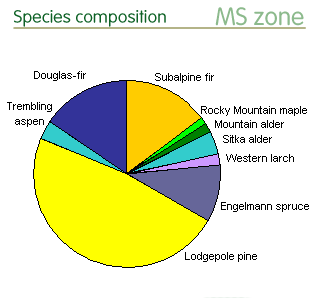 Lodgepole, the major species in the zone, forms extensive even-aged stands following fire. Englemann spruce and subalpine fir, longer lived species characteristic of the ESSF zone, mostly occur only as a minor components in the canopy of older lodgepole pine stands on wetter sites and/or in the wetter subzones; on cool-aspect or seepage sites they become more prevalent.

The presence of other species varies greatly by subzone. Tree species diversity is lowest in the cool, dry MSdv (mainly lodgepole pine and subalpine fir) and highest in the wetter and milder MSdk subzone. Douglas-fir and trembling aspen, common in the southern subzones, reach their highest proportions in the MSdk. Western larch, Rocky mountain maple, paper birch and western redcedar, are also prevelant in the MSdk.

To see how species composition in the MS zone varies with climate, view species by subzone pie charts.

Western redcedar, Pacific yew, and western white pine have wide, disjunct distributions across southern BC, mainly in mesothermal and cool temperate climates where they are common and well protected. Less than 2% of their range occurs in the warmer and wetter MS subzones bordering the ICH and they are not considered important species in the MS zone in terms of in situ conservation.  For western white pine, increasing active management (selection, breeding, deployment of disease resistant trees), rather than passive in situ conservation, may be a better long-term strategy.  Whitebark pine, more characteristic of wetter, higher-elevation AT and ESSF zones may also benefit more from increased active management and ex situ conservation efforts.

Choke cherry, water birch, sitka willow and pussy willow are wide-ranging species in BC.  The first three have a small portion of their range in the MS and are either well protected, or recommended for field verification in other zones (e.g. it is recommended that conservation efforts for water birch be directed at verification in the IDFxh2 and dm2, or at the northern part of its range in the BWBS zone).  In contrast, pussy willow has a higher proportion of its range in the MS zone (8%) and is potentially under-protected in many adjoining zones (IDF, ESSF, ICH zones together containing 35 % of its range).  As such, it is identified as a species of concern and its protected area populations in the MS zone could be of importance for genetic conservation.

Limber pine is known to occur in southeastern BC.  While there are no location records for limber pine in the MS zone in the data set, it is considered to be a species of importance in MS zone as protection levels are low in the adjoining IDF and ESSF zones.