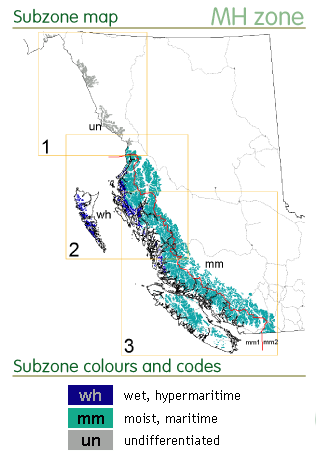 The MH zone occurs at subalpine elevations along the Coastal Mountains and on the Insular Mountains of Vancouver Island and the Queen Charlotte Islands. It occurs above the CWH zone, and if the mountains are high enough, below the AT zone.

The climate in the MH zone is subalpine boreal ranging from hypermaritime to submaritime. The summers are short and cool, and the winters cool and wet with a deep, long-lasting, heavy snowpack that can exceed 6 m in depth. The ESSF zone, the continental (Cordilleran) subalpine boreal equivalent, has much colder and drier winters and a shorter growing season.

Currently there are two forested subzones recognized: the wet hypermaritime subzone (MHwh) which occurs along the exposed outer coast on the northern mainland and the Queen Charlotte Islands, and the moist maritime subzone (MHmm) which occurs on Vancouver Island and the Coastal Mountains. The MHmm is further stratified into windward and leeward variants. Precipitation in the MHwh can exceed 4500 mm making it one of the wettest climates in Canada. In the MHmm, average precipitation varies from around 3500 mm on windward side of the Coast Mountains to 2000 mm on the leeside. The lower elevational limit of the MH zone also varies greatly with latitude, distance from the coast and exposure. The MHwh can occur as low as 230 m and the MHmm from 450 m on windward sites to 580 m on leeward sites. On average the zone occupies a band of 400-1000m in the north and 900-1800m in the south. Mean annual temperature varies from 5°C on the outer coast to 1.4°C on the leeside of the Coast Mountains. 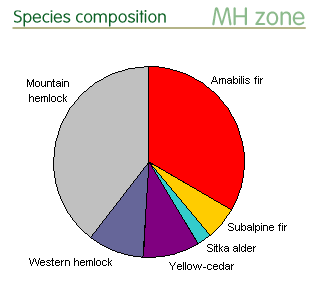 The growing season in MH zone is short and although temperatures are high enough to support tree growth (1-3 months with mean annual temperatures >10°C), forest growth is still temperature-limited. The clear distinction between forested and parkland subzones (or areas with continuous vs. patchy forests) relates to growing season length and snowpack duration. In parkland ecosystems (at upper elevations or in areas where the snow pack is deep and prolonged) trees are confined to isolated patches or “islands” with earlier snow melt. Subalpine heath, herb meadows and wetlands are the dominant vegetation in parkland subzones, particularly at higher elevations and in wetter areas along streams or in snow basins.

The forests are rarely disturbed, especially at higher elevations, and old-growth ecosystems are common. Mountain hemlock is prevalent throughout the zone in both forested and parkland ecosystems. The importance of other common species varies with climate. Amabilis fir is more common in the drier and cooler forests in the MHmm subzone, while yellow-cedar is more common in the milder and wetter MHwh subzone, especially on wetter sites with bog forests. Western hemlock occurs at lower elevations throughout the zone. Subalpine fir is found in colder drier areas transitional to the ESSF zone. Minor species include western red-cedar at low elevations, Sitka spruce in the north, and western white pine in the south at low elevations.

To see how species composition in the MH zone varies with climate, view species by subzone pie charts.

The MH zone is very well protected by a relatively small number (< 100) of protected areas. Coverage is only notably low (3%) in the small MH un (an unclassified portion of the MH zone) but the remote area has low disturbance levels with a high proportion of older forests (>120 years).

Shore pine and western red cedar are the only species in the MH zone with low calculated levels of protection.  On the south coast of BC these species typically occur at lower elevations and are characteristic of the CWH zone. Western red cedar is often found on medium to rich, moist sites, while shore pine is common on poor, wet sites, in bog forests, bog woodlands, and bogs. On the north and central, these species can be found in the MHwh.  Based on the 2002 protected area database, adequate protection is expected only in Gwaii Haanas. However, with the recent protected area expansion, protection levels and opportunities for range expansion are likely adequate in the new protected areas around Work Channel, the Ecstall River, Stephens, or Kennedy Island in the north; on Pitt Island, Princess Royal Island, or along Granville Channel in the central area; and in the south around Roscoe Inlet, the Koeye River, or Draney Inlet.

No genetic conservation concerns have been identified for species in the MH zone.