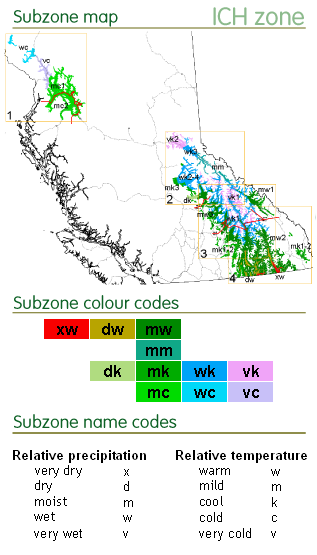 The ICH is relatively small interior zone covering 5.5% of the province. In the northwest it is found east of the Coast Mountains at low-mid elevations in the Nass River basin and in parts of the Skeena, Stikine and Iskut basins. In the southeast it occurs on the lower slopes of the Columbia Mountains, the lower windward slopes of the Rocky Mountains, and parts of the Shuswap and Quesnel highlands.

The zone has a continental, cool to warm temperate climate. The winters are cool and summers warm and dry with a 3-5 month growing season. The precipitation is significantly less than in the CWH zone but the late snow-melt and short growing season minimize summer soil water deficit and create hydrological conditions comparible to the CWH zone. The ICH zone is the wettest of the interior montane (IDF, MS, PP) and boreal montane zones (BWBS, SBS, SBPS) zones but drier than the interior subalpine boreal (ESSF, SWB) zones.

The zone has a mean annual temperature and precipitation of 3.3°C and 780mm. Temperature of the warmest month varies 24.6 to 21.8°C with an average of 23.1°C — temperate climates with mean warmest month temperatures less than 22°C are considered cool instead of warm. The driest subzone, located in the southern interior BC, has a mean annual and summer precipitation of only 570mm and 200mm, respectively. In contrast, the high elevation variants (ICHvk1, wk1) located below the ESSF zone around Revelstoke and Golden have almost twice the amount of precipitation. 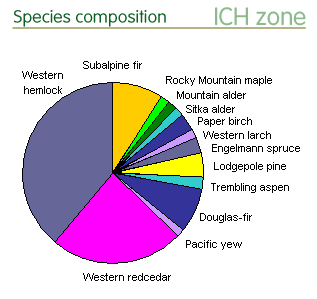 The warm summer temperatures and favourable soil moistures conditions contribute to the high levels of forest productivity and tree species diversity in this zone. Of the 23 conifers found in BC, only yellow-cedar, Rocky Mountain juniper, jack pine, limber pine, tamarak and subalpine larch do not occur as minor species somewhere in this zone.

Western hemlock and western redcedar, the two most common species, dominate old-growth stands in most subzones. Hemlock is absent only in the small ICHdk subzone near Canim Lake and in most of the ICHmk subzone (excluding the Kootney portion). Western redcedar is absent only in the ICHwc and vc, the two most northern subzones. In wetter and cooler areas, especially at high elevations or in areas with cold air drainage or ponding, subalpine fir and Englemann spruce are important climax species. Subalpine fir occurs to some degree in all subzone except the ICH xm while Englemann (hybrid) spruce occurs mainly in the southern high elevation subzones bording the ESSF.

Amabilis fir, Sitka (hybrid) spruce and Mountain hemlock, three strictly coastal species, occur as minor species in the variants to the northeast bordering the CWH and MS zones. Douglas-fir, lodgepole pine, ponderosa pine, western white pine, and western larch are common and often persistent seral species. Pacific yew occurs mostly in the south. Grand-fir is a minor species on the zone level (i.e. does not register on the zone pie chart) which occurs only in the IChxw and vw – two small subzones in the extreme south. Trembling aspen and paper birch occur mainly in the drier areas with more frequent fires. Sitka and Mountain alders have the highest cover values in the northeastern subzones.

Non-forested communites are infrequent in the zone. Marshes and small cedar-hemlock-spruce swamp forests occur mostly in valley bottoms near lakes and streams. Small bogs can occur in some upland areas.

To see how species composition in the ICH zone varies with climate, view species by subzone pie charts.

More than half of the common species in the ICH zone are expected to occur in protected areas at threshold values but generally less  than 10% of their cumulative cover is protected.  Of the 14 species with low calculated levels of protected area coverage, Pacific crab apple, cascara, choke cherry, pin cherry and grand fir have identified conservation concerns in the ICH zone.

Whitebark pine, mountain hemlock, sitka spruce, white spruce, and Pacific crab apple are not predicted to increase climate warming, and are not species of concern in terms of genetic conservation. They are considered transitional species, characteristic of other zones where they are generally adequately protected.  Populations of Pacific crab apple in the ICHmc, vc, and adjoining CWHws could be of future importance if it is identified as a local-interest species or with the potential for range expansion in the northern subzones.

Rocky Mountain juniper, water birch, hawthorn, Cascara, choke cherry, pin cherry, and pussy willow are very site-specific small tree species with narrow subzone distributions in the ICH. Rocky Mountain juniper, water birch, and hawthorn are more common and well protected in the neighbouring IDF zone.  In the ICH they are not considered to be of primary importance in terms of genetic conservation.   Cascara only has a minor presence in the zone (3% of its provincial distribution) but protection opportunities for interior populations of this species do not exist elsewhere. Populations of choke cherry, pin cherry, and pussy willow in the ICH zone are also considered important as they are potentially under-protected in the adjoining units of the IDFdm2 or SBS (SBSmm/ mc1/dw1/wk1, mw) which have low protected area coverage.

Compared to the other under protected species, bitter cherry and grand fir have a large proportion of their provincial ranges in the ICH zone (20 and 10%, respectively). Bitter cherry is potentially protected at lower threshold levels, which may be adequate for smaller trees. Grand fir is considered of importance in the ICH zone, as the zone may offer the best protection opportunities for interior populations of this species.

Field verification of protected area populations is recommend for grand fir in the ICHdw/xw or IDFww/dw subzones, and if required, protection levels for this species increased.  Verification is recommended for the culturally significant, infrequent and potentially declining interior populations of Cascara in the ICHmw2 and mw3 variants.

Verification is recommended for the cherries in the northwestern, northeastern, and southeastern ICH.  For pussy willow, verification is first recommended in the three protected areas where it is predicted to occur at low threshold levels (Nisga’a, Seven Sisters, Cariboo Mountains). If under-protected in the eastern ICH, field verification could occur in the multi-zone protected areas that span the ESSF, IDF, SBS, or MS subzones (e.g., Kootenay, Wells Gray, Bowron, Myra–Bellevue).

An increase in protected area coverage is recommended only for grand fir populations in the ICHdw/xw. The ICHmc2, with < 5% protected area coverage, is the only unit where increasing protected areas could potentially benefit more than two species (bitter cherry, pin cherry, choke cherry, and Pacific crab apple are all recorded at their highest frequencies in this unit). However, the need for increased protection in this portion of the ICH zone should be evaluated after field verification of population sizes in the existing and recently established protected areas of neighbouring or nearby CWH subzones.