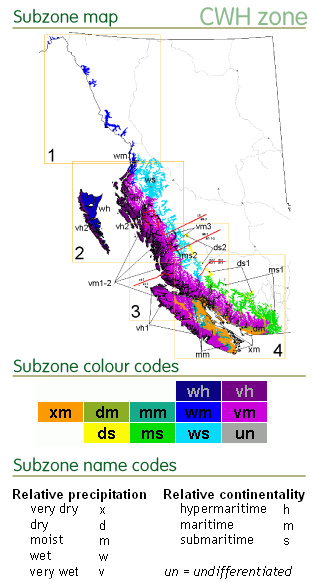 The CWH zone occurs at low to mid-elevations along much of the coast of BC, covering 10.8 million ha or 11.4% of the province. Except along major river valleys it is found mostly west of the Coast Mountains. At higher elevations it is bordered by the Mountain Hemlock zone, and in southern coastal BC by the Coastal Douglas-fir zone. 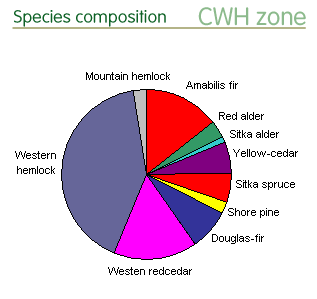 Highly productive and structural complex coniferous forests are characteristic in this wet and mild climate. Wind is the common form of natural disturbance and compared to fire, generally only affects single trees or small patches of forest. As a result most of the forests are old; only the MH zone has a higher proportion of older forests. Western hemlock is the most common tree species and together with western redcedar is generally frequent throughout the zone. The cover of the other major species generally varies with climate (e.g. Douglas-fir is more prevalent in the drier and warmer subzones; Amabilis fir in the wetter and cooler subzones with higher elevation or latitude; yellow-cedar in the wetter, hypermaritime and maritime subzones), local conditions (e.g. shore pine on very dry or wet sites, alders on disturbed sites, cottonwood on floodplains) or both (e.g. Sitka spruce is common on a variety of sites in the north but less frequent and restricted to floodplains and beaches in the south). Species such as white pine, grand fir and bigleaf maple are considered minor species at the zone level (i.e. do not register on the zone pie chart) as they only occur in a limited number of the warmer and drier southern subzones.

To see how species composition in the CWH zone varies with climate, view species by subzone pie charts.

The CWH zone has more than 300 protected areas, and prior to the protected area expansion on the north and central coast, 12% of the CWH zone was protected. More than half of the protected areas are large and well distributed among and within the subzone/variants. The exception is the CWHmm1/2 with only two, large, centrally located reserves in very close proximity.

In terms of the proportion of land protected, six of the 13 subzone/variant units are under-represented and have less than 10% protected area coverage. Some of these units (e.g. xm1, xm2, dm, vm) have relatively high levels of disturbance due to settlement and/or forest harvesting.  Units with representative levels of protection (10–15%) vary from relatively undisturbed (vh2) to disturbed (mm1/ mm2, ds1/ds2, ms1/ms2). The highest protected area coverage is found in the relatively undisturbed vm3, vh1, wh1/wh2 units.

Most of the species in the CWH zone are expected to be well represented in protected areas. Of the seven under protected species, four are considered conservation concerns in the CWH zone. Arbutus and Cascara are narrowly distributed species that have a significant portion of their provincial ranges in the CWH zone.  Since they are also under protected in the CDF zone, field verification of population sizes is recommended in CWH zone, especially for Arbutus, which has the potential to increase with climate warming.  In contrast, hazelnut, trembling aspen, Bebb’s willow, Scouler’s willow, and hawthorn only have a minor presence in the CWH zone and are not expected to increase with climate warming.  Further, their protection is predicted (for all except hawthorn) in the IDF portions of several large, multi-zone protected areas spanning the transition from maritime to continental climates.  In terms of conservation genetics, only the rare clonal stands of trembling aspen in the Fraser Valley are of primary concern.  Field verification is only recommended for hawthorn as it is not expected to occur at threshold values in the protected areas of the CDF zone, the CWH zone, or in the IDF portions of multi-zone protected areas spanning the CWH zone.

Many of the species with low protection levels in the CWH zone occur with highest frequency in the drier and milder subzones or variants (xm1, xm2, dm, ds1, ds2). These units tend to have the high levels of disturbance and the lowest protected area coverage.   Increasing protected areas coverage on suitable sites in the xm1, xm2, and dm subzones and variants could potentially increase protection for Arbutus, Cascara, trembling aspen, and hawthorn. In the case of hawthorn, it is recommended that its presence be verified in the small protected areas (i.e., those not considered in this analysis), on private lands with a conservation objective, and in regional/district/city parks or recreational areas with suitable habitats.