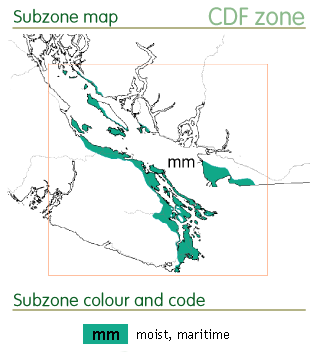 The CDF zone is one of the smallest zones in BC, covering only 0.3% of the province. It is located on low elevation (0 to 260m) areas on parts of the mainland coast, the Gulf Islands, and along the southeastern coast of Vancouver Island.

The climate of the CDF and the neighbouring CWH zone is strongly influenced by the Pacific ocean. Both have cool mesothermal climates with mild winters (mesothermal climates are distinguished from temperate climates by coldest month temperatures >-3°C; cool mesothermal climates have a mean warmest month temperature <22°C and a growing season length >4 months). The CDF zone lies in the rain shadow of Vancouver Island and the Olympic Islands and is much drier, warmer and sunnier that the neighbouring CWH zone. The mean annual precipitation in the CDF is 1000 mm, compared to 2200mm in the CWH zone. Winters in the CDF are wet (800mm of precipitation) and the summers are long, sunny, warm (mean warmest month temperature of 16.9°C) and dry (200mm of precipitation). 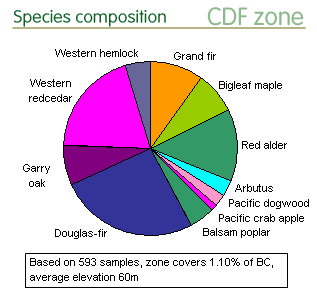 Douglas-fir occurs on a wide range of sites and is the most common species in upland forests. It is well adapted to fires which were historically frequent in this zone.

Gary oak and Arbutus occur on sunny drier sites such as in clearings, meadows, rocky bluffs, or in seaside parkland. Gary oak meadows are a unique feature of the zone. Many rare species are found in these meadows and on dry grassy bluffs. In BC, Gary oak and Arbutus are exclusive to the CDF zone.

The CDF is the least protected zone in BC and has the lowest number of large (>250 ha) protected areas.  Of the 80 protected areas, only five are larger than > 250 ha, together covering 1% of the zone.  Most of the protected areas are small, isolated land parcels surrounded by development. Almost one third of the land has been converted or altered by logging, agriculture, grazing, mining, and residential development.  Less than 1% of the forest is old growth and <10% is older than 120 years.  The older forests occur in small, highly fragmented patches and many of the ecosystems, plant and wildlife species in the zone are considered to be threatened or endangered. Fire suppression and invasive species have had an impact on certain ecosystems (e.g. Garry oak meadows) and climate warming will likely further impact the frequency of occurrence of many plant and animal communities. It is recommended that a more robust and interconnected network of actively managed protected areas, including wildlife management areas and old-growth management areas be established in the CDF zone.  This data analysis does not include protected areas added since 2002 (e.g., Gulf Islands National Park Reserve), but they are not expected to have a great effect on the overall protected area statistics for the CDF zone.  The analysis also does not include very small protected areas and regional or municipal parks.  In this small, disturbed zone it may be appropriate to consider the network of small land parcels or ecosystems protected by the Forest and Range Practices Act, conservation covenants, active conservation management plans and city or regional parks.  Use of the terrestrial ecosystem mapping data for the CDF zone would allow for calculations of protection on a finer scale (e.g. site series or successional stage) and evaluations could be species-specific and consider mating systems, landscape/ environmental features, protected area requirements (e.g. acceptable levels of fragmentation, connectivity, ecosystem integrity, complexity, and disturbance).

Overall protection levels are very low with 15 of the 23 species calculated to have low protected area representation in the CDF zone.  Of these 15 species, Arbutus, Pacific dogwood, Pacific crab apple, Cascara, Sitka spruce, and shore pine are categorized as characteristic of the coastal region (CDF or CWH zones).  Arbutus is the least protected species across its entire BC range and is considered to high-priority in terms of genetic conservation in the CDF zone.  Pacific dogwood, Pacific crab apple, and Cascara are also considered high-priority species as their range in the CDF zone is substantial (11–47% coastal provincial cumulative cover) and not adequately protected.  Sitka spruce and shore pine are considered low-priority as they are both more common and extremely well-protected in the CWH zone.

Hawthorn, Rocky Mountain juniper, and trembling aspen occur in a number of zones in BC with varying protection levels.  However, in the disjunct coastal portions of their ranges (CDF or CWH zones) they are all potentially under-protected and considered high-priority species.

Overall the recommendation for the CDF zone include the 1) establishment of new protected areas, 2) review of species specific protection requirements, and 3) re-analysis using site level inventory and ecosystem data.  In the interim, field verification of protected area population sizes is only recommended for species that have low protected area representation in both the CDF and CWH zones (Arbutus, Pacific dogwood, Pacific crab apple, Cascara, hawthorn, Rocky Mountain juniper, trembling aspen).  It is also recommended that small protected areas (i.e., those not considered in this analysis) and areas with unofficial protection status, such as regional or city parks or recreational areas with suitable sites, and on managed or protected private land be considered.