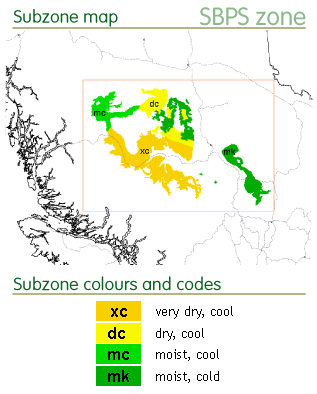 The SBPS is a small montane zone that covers 2.5% of the province. It occurs on the high rolling Neckako and Fraser plateaus at elevations of 850-1250m in the north and 900-1500m in the south and west.

It occurs below the MS and ESSF and beside or below the SBS zone. At lower elevations in the south it grades into the IDF zone.

The SBPS zone, located in the rainshadow of the Coast mountains, has a summer-dry, subcontinental to continental climate. It is has a shorter (1-3 months), cooler and drier growing season than the adjacent SBS zone, with frequent night-time frosts throughout the growing season. Mean annual temperature and precipitation range from 1.5°C and 411mm in the SPSPxc subzone to 2.5°C and 540mm in the SBPSmk subzone. 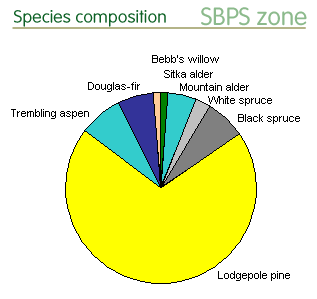 Tree species diversity is low in the SBPS zone. Lodgepole pine is the only constant dominant species. Dry soil moisture conditions and forest fires promote extensive, dense, even-aged, single-storied stands of lodgepole pine. Hybrid and pure white spruce, and trembling aspen are infrequent and occur only on wetter sites usually boardering wetlands and streams. Black spruce is a minor species in the northern subzones where it occurs in the colder valley bottoms and in wetlands. Douglas-fir is common in the southern interior subzone where it grows on warm-aspect slopes. Alders occur on moister sites and are more common in the SBSmc and SBSmk subzones.

Nonforested grasslands, wetlands and scrub-carrs (willows and scrub birch) are very common in the zone.

To see how species composition in the SBPS zone varies with climate, view species by subzone pie charts.

The SBPS zone has 17 protected areas, 11 of which are larger than 250 ha. On average, 9% of the land is protected. Coverage ranges from very high (50%) in the mc, to low (< 6%) in the dc and xc, and virtually absent in the mk subzone. Harvesting and fire disturbance levels are very high and most of the forests are less than 120 years old.

Engelmann spruce, choke cherry, pin cherry, paper birch, balsam poplar, Scouler’s willow, and Douglas-fir all have low levels of protection.  They have < 1% of their provincial cumulative cover within the SBPS zone and are not ranked as high conservation priorities.  These species are mostly considered to be transitional species characteristic of neighbouring zones.  Choke cherry and pin cherry contribute little towards tree cover in the SBPS zone, and are identified as conservation concerns in the neighbouring IDF zone. The occurrence of Engelmann spruce is predicted to decline with climate warming. Paper birch, balsam poplar and Scouler’s willow are predicted to increase with climate warming and are generally well protected in the SBS, IDF, and ICH zones. However, it should be noted that are few large protected areas in the neighbouring zones (SBSdw1/2 and IDFdk3, dk4, ICHmk3/dk) and the lack of coverage in these transitional areas maybe of concern in the future. While Douglas-fir has only a small proportion of its range in the zone (1%), it currently accounts for 6% of the zone’s total tree cumulative cover and is predicted to increase with climate warming. It is potentially protected in the south (IDF portion of Churn Creek) and in the east (SBS or ICH portions of Schoolhouse) and should its frequency increases with climate warming, it is expected that the existing protected areas in all subzones, except the isolated SBPSmk, would provide adequate protection.

Pussy willow is the only under-protected species recommended for population verification in the SBPS.   It has a substantial proportion (10%) of its provincial cumulative cover in the SBPS zone.  It has low calculated protection levels in the SBPS and in the adjoining SBS and IDF zones which contain more than half of its provincial cumulative cover distribution.   Populations of pussy willow in the SBPS could be very important for genetic conservation if protection levels in the SBS and IDF are found to be low or if it is absent in the large multi-zone protected areas in the transitional areas in the north and south (e.g., Entiako, Churn Creek).

Protection for pussy willow in expected within the multizone protected areas in south (IDF portion of Churn Creek) and the north (ESSF or SBS portions of Entiako and Tweedsmuir) but not in the western or central SBPS zone. In the western SBPSmk subzone, verification is recommended only in the small Green Lake complex and in the central SBPS, in Kluskoil, Nazko, and White Pelican.