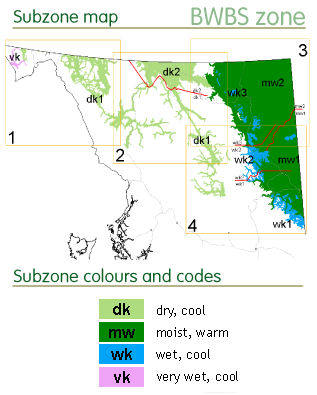 The BWBS zone is the largest forested zone in BC covering 16.3% of the province. It occurs on the Alberta plateau in northeastern BC and in the main valleys west of the Rocky Mountains. At higher elevations the BWBS merges into the subalpine boreal SWB or ESSF zones; at lower elevations it adjoins the warmer sub-boreal SBS or the milder wetter ICH zone.

The boreal climate in this zone is cold continental to hypercontinental. The winters are long and very cold (permafrost is common in some areas) and the summers relatively short (3 month growing season) but warm with frequent high mid-summer temperatures. Precipitation is lower than in most of the adjoining zones. Moisture availability ranges from summer-dry to summer-wet. The centrally located BWBSdk subzone, ranging from 400-1200m in elevation, is the driest and coolest subzone. The small BWBSvk subzone located in the northwest is the warmest and wettest. The two subzones in eastern BC occupy different topographic locations on the landscape. The cooler and wetter BWBSwk subzone occurs at higher elevations (800-1200m) on the mid-lower slopes and foothills of the Rocky Mountains. It is located below the ESSF or SWB zone and above the large, lower lying BWBSmw subzone (300-1000m). 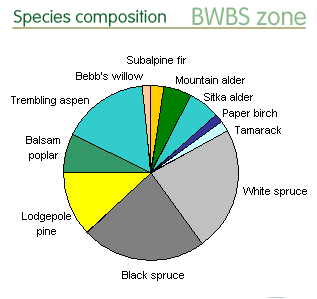 The three main conifers – white spruce, black spruce and lodgepole pine – are found in a variety of different forests types throughout the zone. Mixed stands of white spruce and aspen, or black spruce and lodgepole pine are most common forests in upland areas. Black spruce dominated mossy forests are common on wetter sites and open lodgepole pine – lichen forests on drier sites. White spruce and balsam popular stands are found on richer well-drained sites along rivers. Tamarack is a minor species of importance in most subzones. It forms pure stands on rich fens and swamps, or occurs as a minor component in the stunted black spruce stands which are very common on poorly drained organic soils in lowland areas. Subalpine fir, a common minor species on the zone level, is of greater importance in certain subzones/variants.

Grassland and scrub communities occur on steep warm-aspect slopes in the drier portion of the zone. The occurrence of willow, alder, and birch are restricted to specific sites.

There are just over 100 protected areas in the BWBS zone.  While many of BC’s largest parks cover parts of the BWBS zone, average coverage is low and unevenly distributed. The large BWBS mw1 and mw2 subzones, located in the Alberta Plateau region, which together cover more than 10% of the province, have less than 3% protected area coverage. Protected area coverage is also notably low in the dk2 subzone on the Liard Plain region. Forests older than 120 years mostly occur on less than 20% of the land area.  The units with the highest proportion of older forests are well protected (>25% coverage).

Most of the species in the BWBS zone are well protected.  Pin cherry and water birch, which have a small portion of their provincial range in the BWBS, are not expected to occur in any protected areas at threshold values. While they are expected to occur in the protected areas of adjoining zones (the SWB or SBS zone), their populations in the Alberta Plateau region of BC are considered important for genetic conservation. The small, potentially under protected, local populations of jack pine are also considered important for conservation as its presence may decline with climate warming.

The conservation priorities identified are for the verification of protected area populations of 1) jack pine in the northern BWBSmw2, 2) pin cherry along the Peace River and in the southern BWBSmw1, and 3) water birch in the BWBSmw.