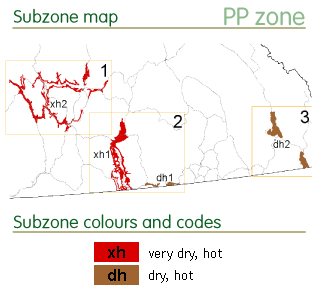 The PP zone is the third smallest zone in BC covering only 0.4% of the province. It occurs in the Rocky Mountain Trench (north of Cranbrook and south of Elko) and along the dry valleys of the southern interior (Fraser, lower Thompson, Nicola, Similkameen, lower Kettle, Okanagan Lake).

The PP zone is the driest forested zone in BC. It occurs below the moister and cooler IDF zone and abuts the drier “treeless” grasslands of the BG zone at lower elevations. The climate is summer-dry, continental cool temperate. The summers are long (5-6 month growing season), hot during the day (highest day-time temperatures in BC), cool at night (low precipitation, dry air and clear skies promote radiative cooling) and very dry (moisture deficits are large and summer precipitation contributes little to plant growth especially on fine soils when it falls in high intensity storms). The winters are cool with little snowfall. The mean annual temperature ranges from 17.7 to 18.7°C. Summer precipitation ranges from as little as 130mm in the PPxh2 subzone to 220mm in the PPdh1. 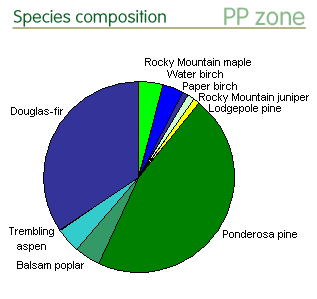 The vegetation pattern in this zone is a mosaic of grassland or shrub-steppe and forested ecosystems. The low productivity, open and park-like forests are dominated by ponderosa pine and graminoids. Douglas-fir is the principle companion species in the northern part of zone. Elsewhere Douglas-fir occurs on wetter water receiving sites associated with gullies, draws and streams. Trembling aspen is found on seepage sites or near riparian areas. Balsam popular and water birch occur on floodplains. Lodgepole pine is restricted to the PPxh1 variant located in the Okanagan valley. The expansive grasslands or shrub-steppes that occur on gently sloping extremely dry sites are floristically similar to those in the BG zone. Alkaline salt ponds occur in depressions or basins where drainage is restricted.

To see how species composition in the PP zone varies with climate, view species by subzone pie charts.

Undisturbed grasslands, wetlands, and riparian ecosystems in the PP zone are rare and under-protected. This situation may worsen as the climate warms and development, fire suppression, invasive species, and recreational impacts in the area continue or intensify.  On average, only 5% of the land in PP zone is protected by less than 40 protected areas, only a quarter of which larger than 250 ha. Many of the large protected areas span several zones extending into both the more arid BG zone and the moister IDF zone.  Compared to other zones the PP zone ranks second for the lowest total coverage and number of protected areas, and third for the lowest percentage of large ones.  Coverage ranges from < 9% in the PPxh1 to almost 0% in the PPdh (Johnstone Creek protects only 30 ha in the PPdh1, and Wasa Lake only 135 ha in the PPdh2).  The PPxh2 has < 4% coverage with large gaps along the Fraser and Nicola River valleys.

Of the 19 species found in the zone, only ponderosa pine, Douglas-fir, trembling aspen, balsam poplar,  Rocky Mountain maple, and water birch are expected to occur in at least three protected areas and only in specific regions at low total coverage (i.e. <6% of their cumulative cover is protected).  For example, none of these species are protected at threshold hold values in the PPdh1, and only Douglas-fir, ponderosa pine, and trembling aspen are expected in Wasa Lake in the PPdh2.  For balsam poplar, Rocky Mountain maple, and water birch, protection is also expected to be low in the adjoining IDFdm2 increasing the importance of these local populations for genetic conservation.

There are 13 minor or infrequent species in the PP zone with low levels of protection throughout the zone.  Many of these species occur on wetter and riparian sites that are often threatened (e.g., cottonwood-dominated riparian ecosystems) and under protected.  As the frequency of these sites and their environmental conditions are not expected to increase with climate warming, only the two species most characteristic of cool semi-arid climates are identified as high priority species in PP zone, with recommendations for field population verification.

Western larch, lodgepole pine pine, Engelmann spruce, western redcedar, paper birch, Bebb’s willow, mountain alder, hazelnut, and hawthorn have < 1% of their provincial cumulative cover within the PP zone and are generally more characteristic of wetter zones. In the PP zone, many are found in cooler or wetter areas and on moist to very wet sites (gullies, draws, seepage, riparian, or wetland sites).  The total cumulative cover of all these species together accounts for only 4% of the zone total and they are not targeted as species of high priority in the zone. Choke cherry, bitter cherry, pin cherry and Rocky Mountain juniper have a greater proportions of their provincial cumulative cover distributions in the PP zone (2–5% for each species). Rocky Mountain juniper is considered to be the most characteristic of cool semi-arid climates and the most tolerant of dry sites. It has 5% of its range in the PP zone and 75 and 9% in the adjoining IDF and BG zones, respectively.  It is recommended that its protected area populations be verified in the field.  Of the cherries, choke cherry has the highest cover values, is found in all PP subzones, and also has a presence (6%) in the drier BG zone.  Field verification is recommended for choke cherry in the PP zone, and for pin cherry and bitter cherry in cooler, less arid zones, where they are more common

For the PP zone, with its low protected area coverage and high population, the minimum and most pragmatic genetic conservation strategy might be to ensure that adequate protection for Rocky Mountain juniper and choke cherry exists in any PP, IDF, and BG portion of one large multi-zone protected area in the Thompson River basin, the Okanagan basin, and the Kettle River and Kootenay River portions of the Columbia River basin. This is likely unachievable in the PPdh as no large multi-zone protected areas exist.  Here, verification is recommended in Wasa Lake (PPdh2) and in the adjacent IDFdm2 in Kikomun Creek and Premier Lake. New protected areas in the PPdh or the expansion of two existing ones (Kikomun Creek: dh2, Johnstone Creek: dh1) could potentially improve the conservation status of several species. Also, the very small (< 5000 individuals) populations of these species outside of protected areas (e.g., junisco pocket south of Kamloops Lake) could be tallied and considered for protection.  Species populations on the network of land parcels held privately or by ENGOs, and the ecosystems protected in conjunction in wildlife habitat, wetland, riparan, and old-growth management areas, or in city or regional parks, could also be considered.  Actively enhancing the incentives and legislation associated with conservation covenants, the Riparian Areas Regulation, and other similar tools, or increasing the connectivity between protected areas to provide corridors for future dispersal, would improve the conservation status of the species in the PP zone.