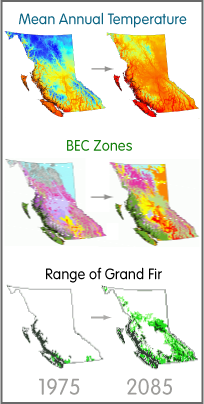 Some of the challenges and results

The Biogeoclimatic Ecosystem Classification (BEC) system serves as a fundamental framework for forest resources management in British Columbia (BC). BCG zones or bioclimatic envelope models have been widely used to project geographic distributions of tree species climates niches for future periods. However, model accuracy and uncertain future climate, remain major challenges for incorporating these projections into climate change adaptation strategies. There are over 140 climate change scenarios from IPCC Fourth Assessments, and they vary substantially in terms of magnitude as well in as spatial and temporal patterns. Taking ensemble averages can involve many scenarios at a time, but it averages out specific spatial and temporal patterns of the individual scenarios, and ends up not representing any of the individual scenarios.

Included below are some of the figures produced in process of examining or testing the modeling process and some of their published results.  (For more detailed information and methodology see Wang et.al. 2012b). 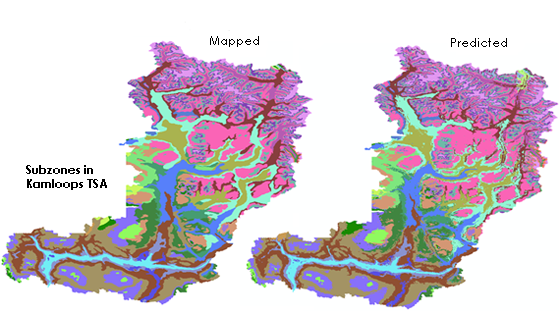 2. The predicted shifts in BCG zones

Since the reference period (1961-1990) about 20% of BC land base has shifted to climates characteristic of different BCG zones. 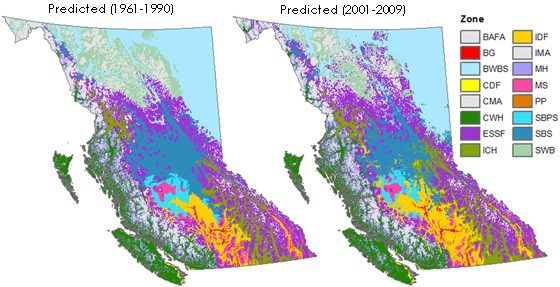 Projections for a future period (2050s) differ substantially depending on the climate change scenarios used. 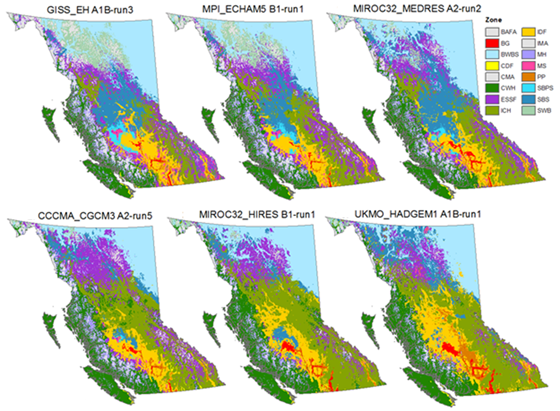 Based on projected changes in temperature and precipitation, 20 climate change scenarios were selected to represent the range and distribution of the projected changes by over 140 climate change scenarios from the IPCC Fourth Assessment. Shifts in bioclimatic envelopes for BGC zones were projected based on each of the 20 climate change scenarios. A consensus projection for a future period was generated based on the most frequently projected BGC zone for each pixel among the 20 individual projections. The level of the model agreement among the 20 individual projections was used to represent the level of uncertainty under climate change. Projected changes in area by the 2050s varied among BGC zones. Climates suitable for Interior Cedar-Hemlock (ICH), Ponderosa Pine (PP), Interior Douglas-fir (IDF), Bunchgrass (BG) and Coastal Western Hemlock (CWH) zones expanded, while climates characterized for Montane Spruce (MS), Sub-Boreal Pine – Spruce (SBPS), Spruce – Willow – Birch (SWB) and Alpine Tundra (AT) zones contracted.

The consensus projections for BGC zones can be visualized and accessed on the web-based version of ClimateBC.  Consensus range projections for the major commercial tree species in BC were produced by associating the projected bioclimatic envelopes for BGC variants with the species occurrence frequencies estimated for each variant (Hamann et.al. 2005).  Although not presently available, these projections will be uploaded to ClimateBC. 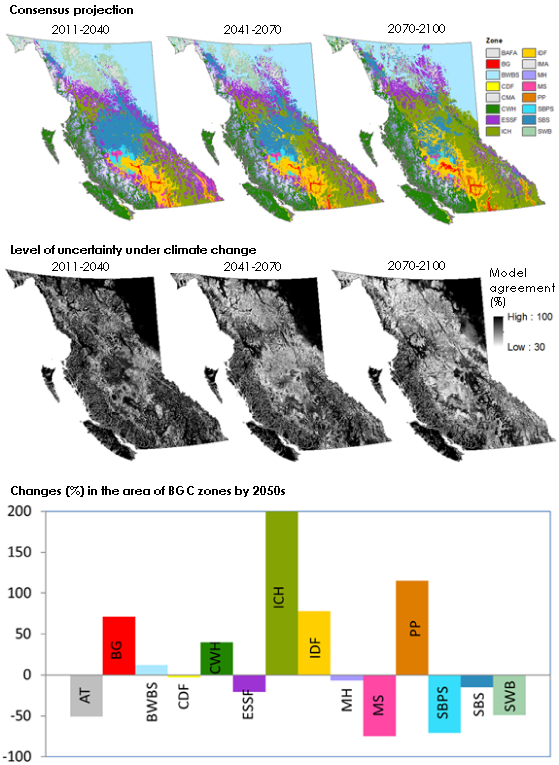 Hamann, A., and T. Wang. 2006. Potential effects of climate change on ecosystem and tree species distribution in British Columbia. Ecology 87:2773–2786.