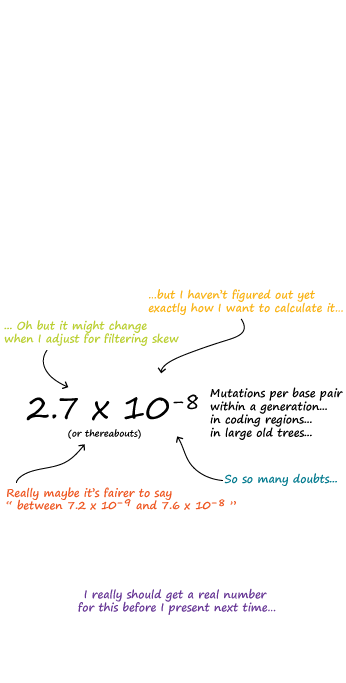 In evolution, a distinction is commonly drawn between mutations that occur in the body of an organism (somatic mutations) and mutations that occur in reproductive tissue (germline mutations). This is because in many animals, only the latter can be inherited by offspring. But this distinction is blurred in plants, since the same cells that build stems and branches—i.e. cells in apical meristems—also produce pollen and ovules. This means that some somatic mutations in plants can be inherited.

The inheritance of somatic mutations may be particularly important for the evolution of trees. Somatic mutations are predicted to accumulate either during DNA replication or due to sources of DNA damage, such as UV light, that are relatively constant through time. When the apical meristems of large trees must undergo many cell divisions (and thus many rounds of DNA replication) for height growth, and when old trees are exposed to time-dependent sources of DNA damage for decades or centuries, trees are predicted to accumulate many somatic mutations.

We studied an exceptionally tall population of old growth Sitka spruce in the Carmanah Valley (Vancouver Island) to estimate the rate at which somatic mutations accumulate. We sequenced DNA from paired tissue samples taken from the top and bottom of 20 trees. Genetic differences between two samples from a tree are somatic mutations that happened during the tree’s lifetime. The somatic mutation rate we calculated is very high per generation, but very low per year: that is, mutations accumulate more slowly in trees than in other species, but their lifetimes can be so long that they produce more mutations in the end.

Most new mutations are expected to be deleterious, or harmful. This means that for tree populations, a large boost to the per-generation mutation rate because of somatic mutations is expected to increase the frequency of harmful genetic variants. This should make trees less well-adapted (to local condition, for example). But more rarely, some new mutations are expected to be beneficial—meaning that trees should also obtain an unusual large number of new genetic variants that could facilitate adaptation. If natural selection works efficiently to separate harmful genetic variants from beneficial ones and increase the frequency of the latter, then a high per-generation somatic mutation rate could help trees overcome the evolutionary delays incurred by their long generation times and adapt to new or fast-changing conditions.